You may be wondering what The Faerie Faith is, and how I got involved in such a thing.

How I got involved

I was introduced to paganism and witchcraft sometime in 1985, when I met Chris at an SCA event. Actually, it would be more correct to say that my friend D. met Chris and I happened to be there. She (Chris) said once, that at first she thought I was a regular jock, but by the end of the event she said I was an "Old Soul". Pretty cool. When D. told me that Chris was a Witch, I remember how I told him to stay away, that Witches were "Evil"! Ironic.

How I ended up in The Faerie Faith

I remember, when reading Drawing Down the Moon, that I really felt a connection to the Dianics. Only one problem - I'm a guy. and a straight guy, at that.
So it was kismet that, through some of the same SCA friends, that I joined up with them and a teacher of the Faerie Faith, a Dianic tradition. We formed The Garden Club. It was one of the most influential 5 years of my life.

What is the Faerie Faith?

The Faerie Faith is a Mystery School descended from The McFarland Dianics (More on that later) basing studies on The Huna System (The Secret Science), The Celtic Mystery Trees, and belief in the Faerie Folk, (including studying their Lessons.) For more info, a good place to start is Linda's Faerie Faith page. I'll also post a lot more on this very subject in a future blog.

Where did the Faerie Faith come from?

It all started in 1970... Well, actually the timing is a bit unclear to me. I have heard from different sources various timelines. It started with Mark Roberts, seen here with my teacher, Epona: 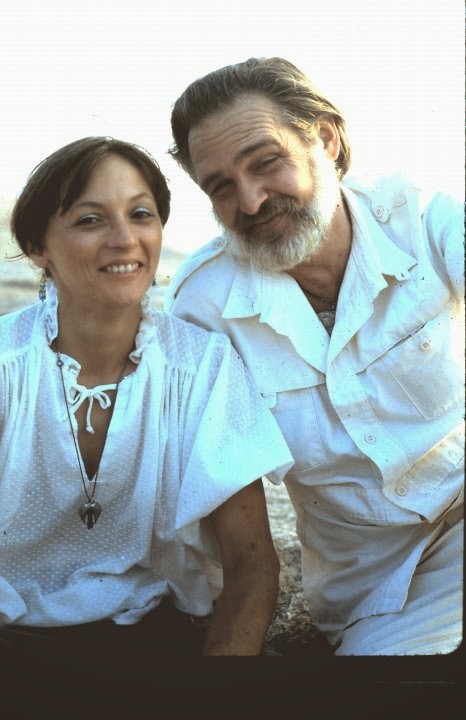 Mark was part of, or started, a couple different traditions in Texas, mainly Hyperborea, and the MacFarland Dianics. Mark shows up in the classic book, Drawing Down the Moon, and looking back on it, it was his writings on the Dianics that drew me to them. (It's amazing that I ended up learning from Epona.)
I have heard, from a very reliable source, that Mark and his group were in contact with Thomas Maughan to start a Druidic group in Texas. (This may have been the start of Hyperborea.) We also know that Mark was, at one point, married to one of Gardner's New Forest coven High Priestesses.
Mark left her, or they split up in some manner, and Mark met and later married Epona. With Epona, they started teaching The Faerie Faith. According to our lore, Mark had learned The Faerie Faith from Margaret Lumely-Brown, who gave him the Tenets (discussed in detail over here .)
As mentioned above, he also supposedly studied with The Arch Druid, Thomas Maughan. We were also told that there are connections to old OBOD. (By 'old OBOD', I mean OBOD back before Phillip Carr-Gomm was the chosen chief.)
Also, in speaking with Rhuddlwm Gawr of Dynion Mwyn, Mark had also spoken with, or learned from Rhuddlwm (in some shape or manner) about Welsh Witchcraft.

When Epona and Mark broke up, Epona took The Faerie Faith and built on it, adding in The Huna work, and further developing the Tree mysteries.
In the mid to late 80s, The Garden Club was started, and over a five year period, we studied The Faerie Faith as a mystery school, learning the mysteries as well as much practical and metaphysical lore and applications.

Please sum up the Influences into The Faerie Faith

Mark's earlier work can be readily seen in the The Faerie Faith.
The Faerie Faith is a Dianic system, often with reverence to one Feminine Deity. (However, many Goddesses and aspects of Goddesses are revered and show up in our lore.) This can be tied back to Mark's work with starting the MacFarland Dianics.
The ritual framework reminds me of Gardnerian style rituals, with the Faerie Faith being a Witchcraft tradition. This could be related to Mark being a Gardarian high Priest (or at least being married to a Gardnerian at one point), or it could tie back further in the lore - it is hard to say.
The Faerie Faith uses the Celtic Mystery trees as  framework for the Mysteries, the cycle of the year, and understanding of the energies of the year. This both ties back to Hyperboria, but also was further developed by Epona.
Much of our lore of the celtic trees originated with Robert Graves' The White Goddess. It was later expanded upon, and clarified through much study.
The problem here is that Graves' work on this, and much of the work on the celtic trees is not seen as 'authentic' and the idea that the celts themselves had a tree calendar has been discredited by many.
However, we know that it works. Through our studies we see the reality in the poetry. (We'll look at that in much more detail over many blog posts.)

But, is The Faerie Faith a valid path?

A lot of effort has been put forth to discredit Mark and his claims. You can read much of it  And much doubt has been thrown on the validity of The Faerie Faith as a spiritual tradition.

Let me side track a minute (not really). Recently, I was listening to a conversation between the Chosen Chief of OBOD, Phillip Carr-Gomm, and The Grand Arch Druid, John Michael Greer. on the topic of Authenticity and Validity. (Excellent conversation - you can hear it here: Druidcast 68 .) Basically it boils down to this: Because a system is Authentic (really really old in most cases), doesn't mean it works. And a system that works doesn't have to be ancient.
According to John Michael Greer, and I agree wholeheartedly, "...In fact, a tradition can be gray with the dust of centuries and completely useless. And in fact, a tradition that was made up over pizza last Thursday, can be a powerful valid system of spiritual development."
So, I come back to my question - How does our lore about Mark effect my path?
Well, I know that the system we use works. It works damn well.
Does it matter if Mark "Made it up"? Nope. Something I like to tell my students, is that all religion is "Made up." Someone made it all up (or if you like, it was 'revealed to them') at some point in time. See my brief note on this here.
Does it really matter if Gerald Gardner made it up, or Doreen Valiente, or Margaret Lumely-Brown? Does it really matter if it was instead Mark or Epona (or even me)? I find the answer to be no.
It's nice to have those big names in the Lineage, but none of that makes it any more or less valid.
But, what if Mark 'stole' the traditions? According to others, even the lessons of the Faerie Faith were taken from magazine articles.
OK, so what? Does that mean they are any less valid? Any less moving?
John Michael Greer talks about this in the above podcast. He says, and I love this comment, "Spiritual traditions always grow by theft. The oldest magical-spiritual tradition in the world is that of stealing anything that isn't nailed down and carrying a crow-bar for the things that are."

So, we have The Faerie Faith. A Mystery Tradition that I find to be completely valid and transformational.
The lore is that the system came from the Great Arch Druid Thomas Maughan (as  mentioned above) and the successor to Dion Fortune, Margaret Lumely-Brown. That we have some connections to the old OBOD (More likely The Druid Order), and have a system of study based on the Celtic Mystery Trees. We could even have a direct line, from Epona to Mark to one of Mark's Ex's to Ol' Gerald.

All of this is some great history, and part of our own shared mythology and lore.

It is important to look at this, and examine the validity of this path, but to keep an open mind.

And to those that would find fault in our wonderful lore, as an old friend once said, "Never let the Truth get in the way of a good story."

Or to put it another way, when dealing with poetics, and much of religion is poetry, the truth is in the effect, and in the result, and not necessarily in the facts.